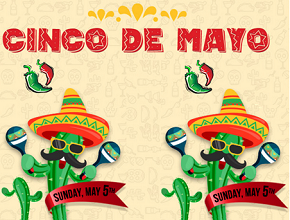 The Month of May sees the Celebrating of Cinco de Mayo at BingoFest. It’s taco bingo madness in May and roomies are getting 10 free spins on Piñata Pop + $50 Bingo bucks. You’ll soon lose that extra “Taco Pounds”in BingoFest’s Sports Bingo Tourney with a weekly top prize of $300.00 in cash. If that is not enough you are dared to spin & win at BingoFest. Yes that’s right at BingoFest the Best spin wins in the Spin & Win slots Tourney. It only takes one spin to take home top prize home. Put on your fancy hat because your going out and about with Kentucky Derby Speed Bingo games and small patterns with juicy prizes.

Join in the May Taco madness at BingoFest . There is up to $25,000.00 in coverall prizes and a guaranteed $10,000.00 Cash prize at the end of month will see you celebrate with a special Taco Dance. Play Now at BingoFest where the fun never stops.

Just to put you in the know regarding the History behind Cinco de Mayo, this is an annual celebration which is held on the 5th of May. The date is observed to commemorate the Mexican Army’s victory over the French Empire at the Battle of Puebla, on May 5, 1862. This took place under the leadership of General Ignacio Zaragoza.

In the United States, Cinco de Mayo has taken on a significance beyond that in Mexico. More popularly celebrated in the United States than Mexico, the date has become associated with the celebration of Mexican-American culture. These celebrations began in California, where they have been observed annually since 1863.